Happy Fourth of July! What you've always wanted to know about the largest 10k Road Race in the World...


For years, I've gotten up at 5a.m. to spend my early morning Fourth of July with 49,999 others in the biggest 10k run in the world -- Atlanta's AJC Peachtree Road Race.
The number has swelled to 55,000 this year --
Fifty five THOUSAND--
hot, eager, overly hydrated and under dressed  weekend warriors, waiting their turn to take 6.2 miles of Peachtree Road's asphalt hostage.

The wheelchair racers start at 6:45 a.m. They whiz down P'tree to the 10th Street Finish Line at around 7a.m. 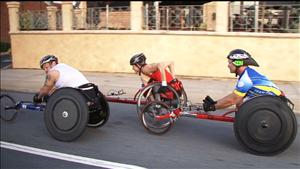 Seeded runners (aka 'Fast' so they run for prize money) start at 7:30. Of the 12,796 runners who completed last year's Peachtree in under an hour, 39 completed it in less than 30 minutes.


And then the fun starts for the rest of us.

If you've run in a 10k, you're familiar with the numbered bib you pin to your shirt. For the Peachtree, the numbers divide runners into starting divisions that correlate to speeds.  When you register, you give them your best past race times so you can start and finish that much earlier.

One year I was fast enough to be in the coveted 2's.
Most years I was back in the 9's. Meaning we didn't reach the start line until after 9 a.m.


There's a thrill that gives you goose bumps when you run (walk) under the Start banner. The radio station DJ's have Michael Jackson blaring, officials are waving, and so far you're pretty cool with the banana you had for breakfast.
Around 1.5 miles is the first Ginormous American Flag hanging from a cherry picker high in the sky.^

And Painting themselves Patriotic. 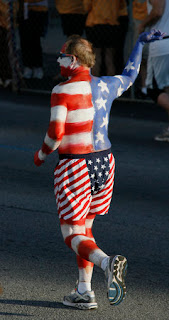 Various branches of the military are represented,
And Miss- represented.
There are even Super Heroes... 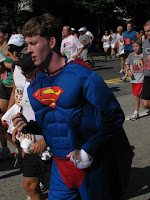 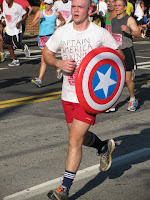 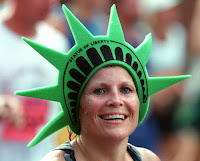 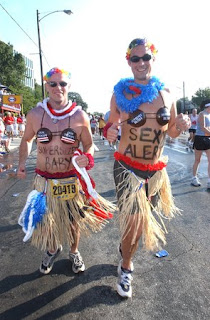 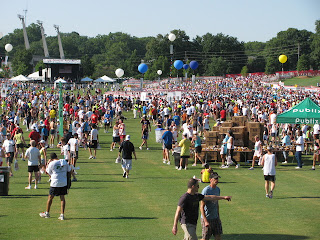 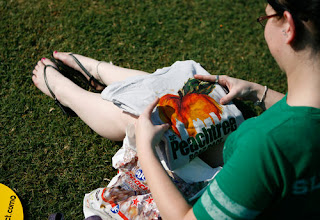 And at the end, everybody has a party in the park, eating bananas, drinking more water, and wearing their new duds. See you tomorrow with a little more of Franklin and India....
And Wednesday for a new DesignWriterMason. Thursday on Twitter at 10am, join us with questions, comments, and tips for #DesignWrite chat!
Happy Fourth of July!